What Ramana Maharshi could teach Mick Jagger about dancing….. 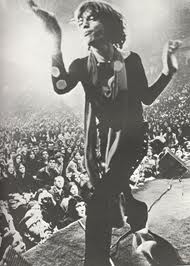 I read somewhere once, a long time ago, the record of a conversation between Ramana Maharshi and a visiting seeker. Ramana’s message was simple to the point of curtness: ‘Simply be yourself.’

Reading this, I felt a twinge of sympathy with the weary pilgrim who had perhaps travelled a long way seeking profundity from the master, to be greeted with those three simple words. ‘Simply be yourself.’ It seemed a cop out somehow, or a remark which wasn’t going to help the seeker get where they needed to be.

Years later, these words come into my mind again. And I smile. What a beautiful expression of the teachings. Those three words have a wholly different resonance now. I was staring at the whole truth in the face and I never saw it.

Simply be yourself. It brings to mind a story from Keith Richards autobiography I read recently. He says that after the Stones got successful, about the time that he and Mick had their big falling out, Mick Jagger started to have dancing lessons  Keith was perplexed by this. Why would would Jagger, one of the greatest dancers ever, with his own inimitable style, need dancing lessons! It was as if, Keith writes, Jagger was trying to learn how to be himself.

Hardly surprising, I suppose, with fame on that level. The character Mick Jagger must be a hard one to live up to. For Mick himself, clearly, it was something he felt he could do better by having dancing lessons. With an end result, according to Keith, that he started to dance without any of the magic he had before.

So I guess that’s a roundabout way of saying we can’t learn how to be ourselves.

We can’t strategise about it, plan for it, practice it. No matter how much we may aspire to what someone else has, and do our best to mimic it, we will only ever end up doing our second hand version. And we will be living an inauthentic life.

It seems to me that many of the people we admire in our lives – the visionaries, creative geniuses, trailblazers in any field – are the ones with the courage to live on their own terms, without compromise, or conformity to the expectations of the world. By simply living from the ‘heart’, to use a well worn spiritual expression, they draw close to flowing with the Tao. Living from their own authentic selves, they exude a bright light. Without any kind of spiritual practice, certain people seem to shine, seemingly in touch with some inner fire the rest of us have no access to.

They’re just simply being themselves.

As Ramana says elsewhere ‘Do not think yourself to be this, that or anything, to be so and so, or to be such and such. Only leave off the falsity. Reality will reveal itself. ‘