Varanasi: notes on Kabir from the holy city 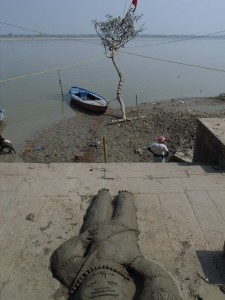 Strange days in the City of Light. Here to write a book about the city, I’m staying on the edge of Assi Ghat, overlooking the muddy brown Ganga. Sounds of drumming rising up from the narrow streets, and a harmonium from a nearby ashram. Bird sounds, sunlight, colourful washing moving on a line. Across the rooftops, a number of small children flying their one rupee kites with delight, occasionally cutting their opponents from the sky with shrill cries of triumph. Car horns, the mooing of cows, a goat bleat, hammering from some distance construction site. And just a few yards away the river flowing slowly, carrying boatman and tourists, travelling some 2500km from the western Himalayas to the Bay of Bengal. Beneath all this, there is an endless silence, a pure awareness ‘Self.’ Onto this empty screen comes the whole world and all the things within in. But this screen is not itself ‘nothing’: but the absolute presence upon the manifest world arises. It cannot be seen or touched in any way by the conceptual mind. But in the quietude of the moment, it can be simply ‘known’ and accepted as the stuff of life.

This was Kabir’s city. Even today this mystic is revered across Varanasi, especially in the weaving communities of which he was a part. Raised by childless weavers, he came to espouse a philosophy that eschewed all dogma, practice and ritual.

What is seen is not the Truth
What is cannot be said
Trust comes not without seeing
Nor understanding without words
The wise comprehends with knowledge
To the ignorant it is but a wonder
Some worship the formless God
Some worship His various forms
In what way He is beyond these attributes
Only the Knower knows
That music cannot be written
How can then be the notes
Says Kabir, awareness alone will overcome illusion