A Review of Standing as Awareness by Greg Goode 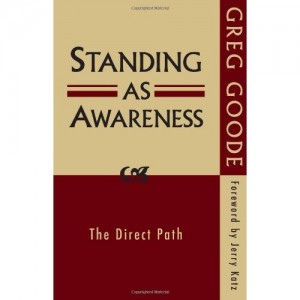 While some non duality books nudge against the new age genre, others stand far closer to philosophy. Standing as Awareness

by Greg Goode is very much in this latter category, and hence can occasionally seem like something of a dry read. It’s worth persevering with, however, for Greg brings a clear and patient understanding to the task of leading the reader through the teachings of Sri Atmananda, also known as The Direct Path.

The book starts with a simple premise: take your stand as awareness.

What if you took a stand, right now, as awareness? Sure, it can seem that ‘everything is awareness’ is almost a cliché these days. But what if you really treated this pronouncement, this recent cliché, as true? Simply you will discover that experience confirms your stand.

Greg’s second step is: fall in love with awareness.

Falling love with awareness consists of being pulled by the curiosity, the yearning, the sweetness. This love is always answered fully by awareness itself….. This sweetness spreads until you come to experience yourself and the world as one undivided awareness.

The third step is: the Witness: from establishment to collapse.

You have realized the witness when nothing seems like it is other than awareness. You no longer have that feeling that there is awareness, and also things existing independently of awareness. Even violence, sickness and biological death don’t seem external to awareness…. At this point, higher reason has almost finished all the work it can do….Having realized the witness, you discover that you’ve always been home. You no longer feel that you were born, or that you will die. If the universe itself perishes, you as awareness are there.

All in all, Standing as Awareness

is a valuable addition to the genre. My feeling on non duality books is that, although they’re often saying basically the same thing, everyone’s take on this is different. Sometimes a particular writing style or tone can resonate with one person and not others, and it’s for this reason that it’s worth reading a broad spectrum, to appreciate the myriad ways in which Oneness can be spoken of, and to hope for those few lines in which our understanding of reality might crack open.

Greg Goode’s website is here and is a particularly valuable source of information, especially for those interested in the crossover between Western philosophy and Advaita Vedanta.