I am that I am: the teachings of the late Indian master Sri Nisargadatta Maharaj 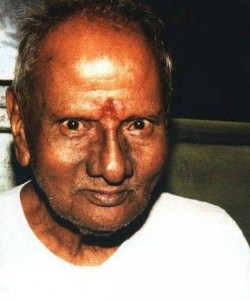 The film company Neti Neti films deserve some sort of award for their work in preserving and promoting the teachings of the late Indian master Sri Nisargadatta Maharaj. In collaboration with Stephen Wolinsky, one of the few living direct students of Maharaj, I am that I am is the first in a series of DVD’s unpacking Maharaj’s teachings. Although I personally find Wolinsky quite eccentric, this DVD does a good job of explaining in simple language what can be quite esoteric in the words of the master.

Nisagardatta was born on April 17, 1897, at break of dawn, during the full moon in the month of Chaitra, to a devout Hindu couple Shivrampant Kambli and Parvatibai. The day was also the birthday of Lord Hanuman, hence the boy was named ‘Maruti’, after Lord Hanuman himself. He became a simple man, running a small bidi shop on a bustling street in Bombay. Always interested in spiritual matters, he was introduced to his guru, Sri Siddharameshwar Maharaj, the head of the Inchegeri branch of the Navnath Sampradaya, by his friend Yashwantrao Baagkar in 1933. His guru told him, “You are not what you take yourself to be…”. He then gave Nisargdatta simple instructions which he followed verbatim, as he himself recounted later: “My Guru ordered me to attend to the sense ‘I am’ and to give attention to nothing else. I just obeyed. I did not follow any particular course of breathing, or meditation, or study of scriptures. Whatever happened, I would turn away my attention from it and remain with the sense ‘I am’. It may look too simple, even crude. My only reason for doing it was that my Guru told me so. Yet it worked!”

After an association that lasted hardly two and a half years, Sri Siddharameshwar Maharaj died on November 9, 1936, though by that time he had done his task. Maruti had reached self-awareness. Soon he adopted a new name, ‘Nisargadatta’ meaning the one who dwells in the natural state. He was also appointed as the spiritual head of the Inchegeri branch of Navnath Sampradaya, the ‘Nine Masters’ tradition, a place he retained through his life.

According to Sri Nisargadatta the purpose of spirituality is to know who you are, a fact he spoke of often in the talks he gave at his humble flat in Khetwadi, Mumbai. He talked about the ‘direct way’ of knowing the Final Reality, in which one becomes aware of one’s original nature through mental discrimination, a method which is common to the teachers of the Navnath Sampradaya. This mental discrimination or the Bird’s way (‘Vihangam Marg’) was also presented by Nisargadatta’s co-disciple, Sri Ranjit Maharaj; wherein Self-Knowledge is gained just as a bird flying in the sky goes easily from branch to branch, instead of slowly crawling its way up the tree like an ant, as in the ‘Pipilika Marg’. Here the disciple reaches straight to truth, without wasting time in long drawn out practices that would take him to the ‘fruit’ no doubt, only slowly. He proposed to use one’s mental faculty to break from the unreal to the real, and the mind’s false identification with the ego, simply by listening to and constantly thinking over what the master has said, and knowing that “You are already That”.

If you haven’t encountered the teachings of Sri Nisargadatta Maharaj, you can buy this excellent introduction from Neti Neti films here.